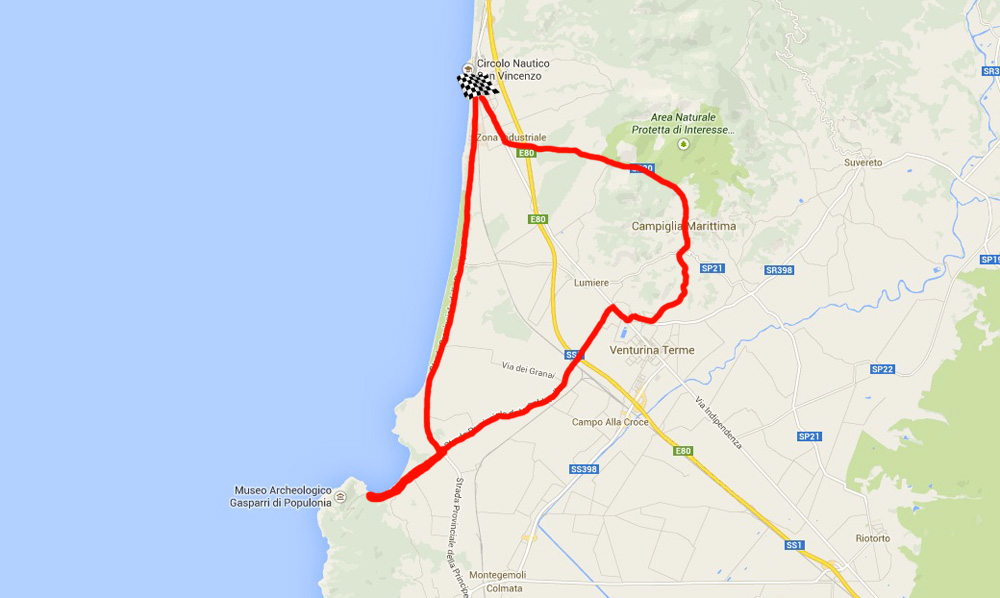 ON THE TRACKS OF THE ETRUSCANS

Depart from San Vincenzo towards the south entering via della Principessa that, in the plains, follows the coast, exploring Rimigliano Natural Park.

After approximately 11 km, you leave the pine forest located in La Torraccia.

After a gentle climb you reach the crossroad for Baratti (12km): turn right, first uphill and then downhill towards the spectacular Gulf of Baratti.

The road passes between the Populonia’s beach and necropolis.

Reaching the small port of Baratti (15 km) turn back to the same road until the intersection with via della Principessa (18 km); at the T-junction turn left, and then immediately right onto the road, which is bounded by high pines, in the direction of Venturina which you will reach after 7,2 km (passing over an obvious viaduct the 4-lane road Aurelia S.S).

Reaching the old Aurelia (25,5 km), turn right until the entrance to the town of Venturina.

After 700 m turn left following the directions for Calidario spa.

Continue past the thermal baths, passing through (around 1 km) the village until an obvious quadrivium (27,3 km).

Here, turn left pedaling uphill for little more than 3 km until an intersection where you continue towards the village of Campiglia di Marittima (31,8 km) that overlooks Val di Cornia.

At the end of the descent , at the roundabout, go left and continue on to Cecina (45 km).
The downtown is easily reached by following the signs from the roundabout near the hospital.
Turn on Old Aurelia in a southern direction.
Pass “La California”, and at the roundabout (possible detour to Marina di Bibbona) go straight, crossing over the “Variante Aurelia” S.S 1 until you come back to the little church of San Guido (on the right; 56,5 km) and continue straight returning back to San Vincenzo.

The only challenging part is the uphill towards Campiglia. A visit near the Golf di Baratti is recommended, and for the lovers of the hot springs, a visit to the warm lake of Calidario (Venturina) is recommended. During the summertime via della Principessa could be congested but you can cycle from the village to La Torraccia. Possible extension: from the small port of Baratti you can climb to Rocca di Populonia; climb for 2 km with a few challenging rises, but the effort is worth it because of the magnificent panorama that you can admire from the promontory of Piombino. With the extension the course measures 45 km with 460 m of drop.